March 2022: Tishkoff PLC obtained a payment of five million dollars for its business clients to settle a Michigan lawsuit. 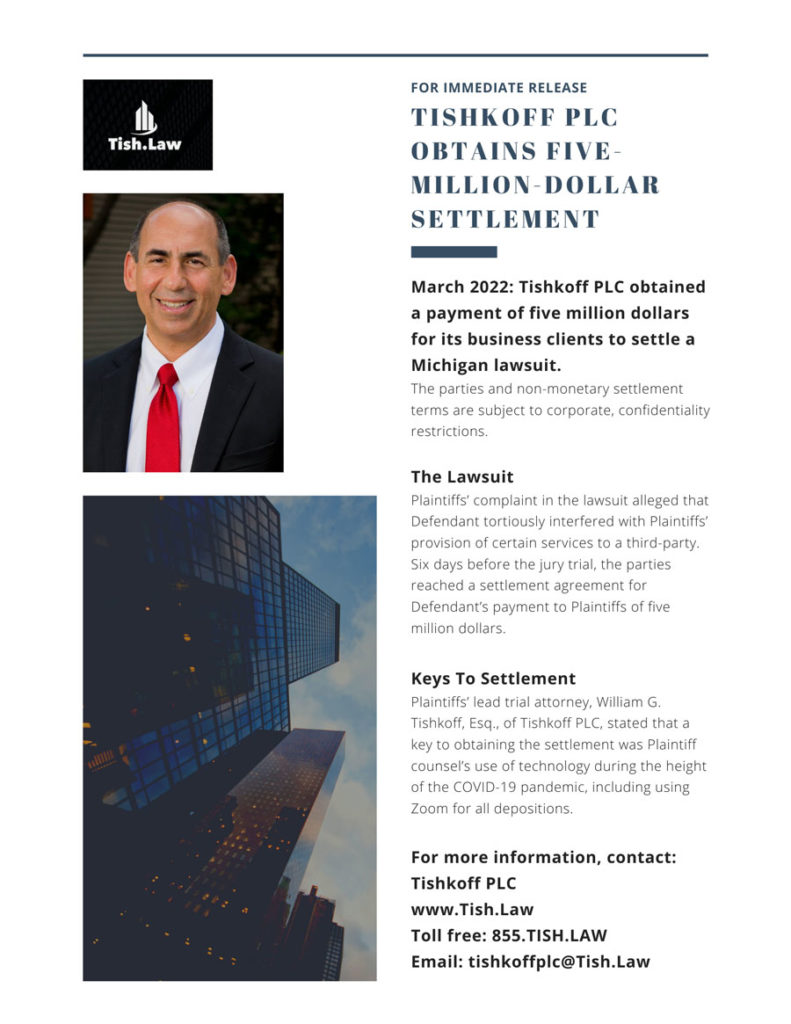 Tishkoff Attorneys Obtain Arbitration Awards Of $670,823.46 And $901,802.72 On Client’s Claims For Breaches Of Employment Contract And Stock Rights Contract.

Tishkoff’s client’s claims arose when his employer and business partner terminated his employment without contractually-required just cause in violation of his employment contract, and denied the client’s rights under his stock rights contract.  Both of the above contracts contained provisions for mandatory arbitration of disputes through the American Arbitration Association.  Following a consolidated arbitration hearing, Tishkoff, in combination with co-counsel James K. Fett of Fett & Fields, P.C., obtained highly favorable awards for its client of $670,823.46 for the claims arising under the stock rights contract and $901,802.72 for the claims arising under the employment contract.
The Michigan Lawyers Weekly summary of the above matter is available here.

Tishkoff’s clients, a family of related trusts, limited liability companies and their principal, were insureds under a liability insurance policy providing coverage for litigation defense expenses. Following Tishkoff’s successful defense of multiple related lawsuits against its clients in Illinois and Virginia, the insurer denied coverage for portions of the clients’ defense expenses. Tishkoff disputed the denial of coverage and, through aggressive settlement negotiations, Tishkoff obtained a favorable settlement of $250,000 for its clients.

Tishkoff successfully defended a limited liability company and its manager in a declaratory judgment and injunction lawsuit in federal court. The declaratory and injunction claims were dismissed in their entirety and Tishkoff obtained a six figure settlement for its clients from their counterclaim.

Tishkoff’s client was on leave under the Family Medical Leave Act when his employer failed to reinstate him at the completion of his leave and interfered with his right to take an FMLA leave. Tishkoff attained a jury verdict of over $225,000 for this client. In a leading published decision the U.S. 6th Circuit Court of Appeals affirmed the jury verdict obtained by Tishkoff.
Read the U.S. 6th Circuit Court of Appeal’s decision here.

Tishkoff’s client sustained multiple fractures of his legs and other soft tissue injuries, and was unable to work and remained disabled, as a result of a truck accident. Tishkoff obtained a $400,000 settlement.

Tishkoff successfully represented a client wrongfully terminated and discriminated against by his employer.
At the time when client was fired, client struggled with fragile health conditions and a long term disability. Tishkoff attained a $125,000 settlement for this client.

Read the Circuit Court of Fairfax County’s Judgment And Final Order, with the incorporated transcript of the court’s trial ruling.

Tishkoff argued that defendant franchisees had violated the franchisor client’s trademark rights and that injunctive relief was appropriate.  The federal court agreed, granting summary judgment for the client and awarding injunctive relief in the form of enjoinment.  The court also awarded summary judgment against defendant franchisees’ counterclaim, leading to its complete dismissal.

Tishkoff successfully defended an appeal of an order in favor of its clients, who owned lakefront property, which prohibited back-lot property owners from erecting a dock and mooring their boats at the terminus of a public alley which bordered the client’s property.
Read more about this case here.

Tishkoff obtained, for a small business owner with over $1.25 million in debt, including a secured judgment in the amount of $900,000, a successful Chapter 11 Bankruptcy reorganization, including the revocation of the secured status of the judgment creditor. The client’s unsecured debts were reduced to 25 percent of the amount owed, to be paid over 120 months.

Tishkoff represented a client, a former Executive Director of a Michigan municipal housing commission, against the commission on her wrongful termination claims of breach of contract and violation of procedural due process, the Michigan Whistleblower’s Protection Act and the Michigan Open Meetings Act.  Tishkoff obtained a settlement for his client of $318,199.91.

Tishkoff represented a client in Federal Court (Eastern District of Michigan, Honorable Julian Abele Cook, Jr.) on its claim against Sandalwood Enterprises, Inc., for breach of a non-disclosure agreement.  The Federal jury rendered a verdict in favor of Tishkoff’s client on April 13, 2005.  The original jury verdict was in the amount of $682,844.35.  An Amended Judgment was entered on June 1, 2005, including accrued interest, for a total award to Tishkoff’s client of $759,515.35.

Tishkoff represented a client, an assistant principal at Sandusky High School, on his age discrimination claim in federal court against an Ohio school district and its superintendent.  Tishkoff’s client, an experienced, popular and highly qualified assistant principal, was passed over for the position of principal in favor of a younger, less experienced candidate.  The younger candidate was awarded the position without posting the opening and allowing Tishkoff’s client to apply.  Tishkoff obtained a jury verdict for his client of $238,000.
Read more about this case here.

Tishkoff Attorneys Obtain $1.5 Million Judgment-Settlement Against The City Of Bay City For Violation Of Section 1983

Tishkoff represented a client, a developer of low-income housing, on its claim against the City of Bay City for denial of constitutional rights in violation of Section 1983 and breach of contract.  The City of Bay City initially granted the developer an ordinance for payment in lieu of taxes.  The city commissioners later voted to rescind this ordinance.  Evidence indicating racial animus on behalf of the city commissioners was uncovered during the lawsuit.   Tishkoff subsequently obtained a $1.5 million settlement/consent judgment for his client, the 21st largest settlement in 2001 reported in Michigan Lawyers Weekly.
Read more about this case here.